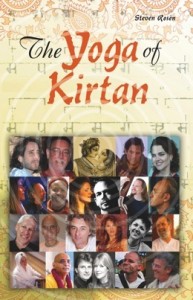 In this week’s podcast we’re going to introduce a book called The Yoga of Kirtan written in 2008 by Steven J. Rosen who’s also known under the name Satyaraja Das.

The book includes 21 interviews on 504 pages as well as a full-length audio CD with kirtan performances by various interviewees. Over 70 minutes of music. As a special feature it contains a previously unreleased live kirtan performance by Krishna Das.

The Yoga of Kirtan explores the history, musical dimensions, and emotional content of sacred chant. Through a series of intimate conversations, this volume brings its readers into the company of present-day kirtan masters, such as Krishna Das, Jai Uttal, Vaiyasaki, Ragani, David Newman, and many others. Their insights reveal the profundity and joy experienced in this ecstatic form of yoga.

We’re first going to present a book review by Jubilee Q. Cooke, an Ethnomusicologist with the School of Music at the University of Washington. In the second part you will have the chance to listen to some of the kirtan performances included on the book’s audio CD.

When most Westerners think of “yoga,” they likely conjure up images of headstands and deep stretches to maintain health and fitness. But another form of yoga, rapidly gaining prominence in the West, is clearly presented in Steven Rosen’s recent book: The Yoga of Kirtan: Conversations on the Sacred Art of Chanting. Kirtan is musical yoga, the practice of singing God’s Names in call-and-response form. In connection to this devotional practice, Rosen, a renowned Vaishnava scholar, presents an inspired offering of knowledge, communion, and music in an easily accessible format. His conversations with twenty-one kirtan singers or kirtaniyas and his short introductory and concluding essays are lively and engaging. Rosen’s book will interest both yoga students and kirtan enthusiasts who wish to understand the deeper significance of their practice. Those who already lead kirtan and longtime practitioners of sacred chant will expand their satsang, their spiritual community, as they connect with these dedicated maestros of chant through the intimate dialogues.

In addition to its clear appeal to students of yoga and sacred chant, The Yoga of Kirtan is also appropriate for scholars. Although its style is not typical of academic literature, the book holds much to glean from Rosen’s friendly presentation and well-informed but relaxed interactions with the kirtan singers. As each kirtaniya is prompted to share their biographical information, we learn of musical influences as varied as Hindustani classical music, Irish sean nόs, Hebrew chant, George Harrison, and American gospel and blues. Many interviewees speak of their Judeo-Christian backgrounds and how their faith deepened through the Eastern practice of kirtan. We gain an in-depth view of Gaudiya Vaishnavism, from a musical perspective, through Rosen’s conversations with several disciples of A. C. Bhaktivedanta Swami Prabhupada. But the author’s approach is non-sectarian, and he has included a wide selection of kirtan singers. Dave Stringer serves as the musical ambassador for Kashmiri Shaivism and Yofiah for Jewish kirtan. Deva Premal and Miten embrace a more ecumenical approach through their interfaith chants. Snatam Kaur informs us of her Sikh faith. And several devotees of Neem Karoli Baba, most notably Krishna Das, share stories of their beloved “Maharaji.”

Some other features of this book are the remarkable experiences shared by each interviewee. A few highlights were Yamuna Devi’s vivid recollections of working with George Harrison in the late 1960s to record the groundbreaking single “The Hare Krishna Mantra” and later the “Radha Krishna Temple” Album. In one of the most entertaining anecdotes, Trinidadian kirtan singer, Agni Dev, speaks frankly of the challenges in acclimating to New York winters while singing kirtan publicly in the streets as a Hare Krishna. And Australian kirtan leader Sri Prahlad gives a moving account of how kirtan helped raise consciousness about the persecution of Soviet Hare Krishnas and motivated political action on their behalf. The book rewards the reader with numerous other such gems generously scattered throughout the chapters.

An audio CD compilation of eleven interviewees is included so that readers may also hear the “yoga of kirtan.” While the sacred names that each kirtaniya chants are primarily from the Vaishnava tradition, the stylistic rendering of each track is about as diverse as can be. We hear Dave Stringer’s lush “Devakinandana Gopala” fusing jazz, pop, and gospel choir with more traditional handclapping and call-and-response form. “Nam-sankirtan” features the equally powerful sound of Latin American pop phenomenon Havi Das, minimally adorning the Holy Names with intricate drum patterns. And then there’s the finely produced “Radha Rani” showcasing Jai Uttal’s Ali Akbar Khan-trained voice and old-timey banjo picking. The CD also includes a newly released track of kirtan sensation Krishna Das singing “Jaya Bhagavan” live in concert.

This unique book will inspire the reader to travel further into the divine realm of kirtan and offers many signposts to assist this journey. Rosen’s guide to the accompanying CD and his short introduction to each chapter function as a discography for further listening. The website or contact information for each kirtaniya is provided at the end of each interview. Also included is an extensive bibliography of both scholarly and popular literature for related reading.

As an ethnomusicologist and researcher of kirtan, Jubilee Q. Cooke has found scholarly sources on kirtan as practiced in the West wanting. Kirtan has been covered in the popular press, in a few works geared towards kirtan audiences, and by ethnomusicologists who have studied its manifestations in India. By providing the most thorough coverage of kirtan’s transformation outside of India to date, The Yoga of Kirtan fills in many gaps in the aforementioned literature.

The book’s treatment of popular kirtan is excellent, but also significant is the mention of lesser known styles of kirtan. Although it includes only one interview with a South Asian kirtaniya, Bhakti Charu Swami, the book offers much information on kirtan in India, through the experiences of Western kirtan singers seeking deeper understanding. As an ethnomusicologist whose discipline requires participant-observation field research, she highly appreciated the accounts of Vaiyasaki Das, Karnamrita Dasi, Ragani and Shyam Das who spent years immersing themselves in the study of South Asian music. Most may be familiar with kirtan as the simple call-and-response chanting of the Names of God, but these kirtaniyas also inform readers of more sophisticated and learned kirtan styles. She was especially interested to learn of dhrupad singing in kirtan through the interviews with Shyam Das and Karnamrita Dasi. Dhrupad is the oldest style of Hindustani classical music, with roots in the Hindu temples of India. As a beginning student of dhrupad, she has great admiration for those who have dedicated themselves to this music which, in addition to being a sacred art form, has the most refined sense of pitch imaginable and commonly uses 7- and 10-beat rhythmic cycles.

In the concluding interview, Vaiyasaki Das introduces yet another style of sacred chant, by bringing us into the complex world of Bangladeshi lila kirtan. He tells how devoted audiences attend marathon kirtans at which the deities’ lives are dramatically reenacted and how educated listeners appreciate raga, the use of specific melodies at different times of day. The interview is appropriately placed at the end because Vaiyaskai Das’ descriptions of traveling in Bangladesh in pursuit of this music leave the reader hungry for more. The Yoga of Kirtan presents an impressive selection of sacred chant, scriptural and historical background, and intimate expertise, but it also nudges readers towards the even vaster world of kirtan that awaits their discovery and participation. The website will tell you more.